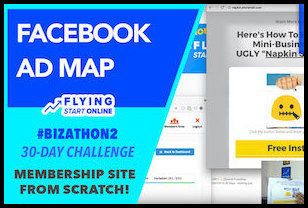 Thanks for joining us!

If you’re tuning in for the first time, we’re building a membership website from scratch in 30 days.

Yesterday we covered SendLane Hacks: How to Integrate Membermouse & Create Workflows which allowed us to automate several important aspects of our marketing.

Today, Day 20 of the #Bizathon we’re setting up our first Facebook Ad campaign and integrating it directly into our existing sales funnel.

1 in 7 human beings on earth login to Facebook daily.

It’s one of the most popular websites on the internet let alone the largest, most active social network. With such high traffic volume, Facebook is an invaluable tool for advertisers.

In today’s video Rito shows exactly what he does for his Facebook ads and what content to use for his creatives:

Nearly 2 billion people log onto Facebook every month with 1.4 billion visiting via mobile. That makes it a hugely viable source of potential income.

Many entrepreneurs think Facebook Ads are too complicated – they’re not.

We remove the guesswork and help you launch your very first creatives.

Our ads always utilize video because they build trust and subsequently conversions. That said, you’re going to shoot multiple videos for multiple ads.

Each ad and each video will be associated with specific subscriber actions.

We are going to have two categories of ads designed to get prospects into our funnel which has 3 stages;

In our case this will follow along with Rito’s personal success story.

The Facebook Retargeting ads will feature a DOer club invite for Leads who have shown previous interest. Like the targeted ads, the retargeted ads will also feature a story-selling video of Rito’s own personal journey to success.

Facebook frowns upon the same creatives (videos) being shown over and over to the same prospects.

They want you to mix things up, keep it fresh and enticing for users or they’ll deem your stuff low quality; essentially black-labelling your ads.

For this reason, we are creative several different videos with essentially the same message. 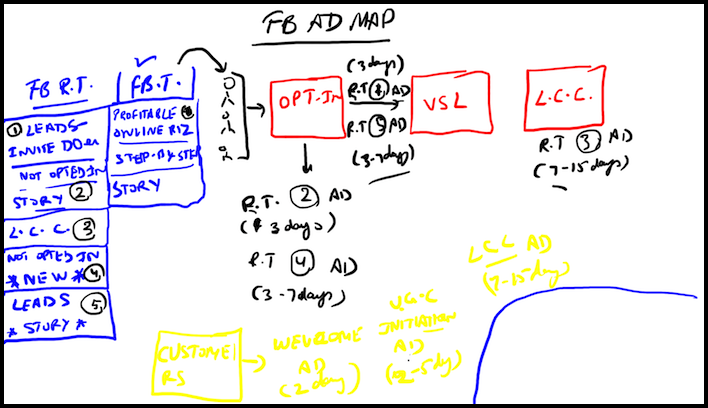 Why on earth would we need to map our FB ads?!

It’s because we’re creating multiple FB Audiences from our traffic; consisting of leads, visitors, and customers.

We’re aiming to get leads (people) to optin to specific lists in order to send them targeted emails.

And based on those specific audiences (viewers of the Day 3 email, Day 7 email, Day 15 email etc. ) – we’re showing a unique creative (image or video) for each and making them progress through the funnel.

Aside from hyper targeting our offers, we are actively learning about what persuades certain people to takes actions.

Prospect will first be shown profitable online business video describing an opportunity to implement method that will fast track success.

If they don’t optin after the first video they are then sent 1, 2 or 3 additional (depending on their actions) storytelling emails attempting to get them to the VSL.

If they make it to the VSL they are then offered an opportunity to take advantage of a live coaching call with Rito himself.

In the event prospects doesn’t bite on the story email they are sent two more emails over the next 3-7 days; revealing the personal success stories of somebody who was just like them before making it.

We are targeting leads who have already expressed interest in Rito and his products. And the first video they’ll be shown will invite them to join the DOer club.

If they opt-in they are then put on the same sequence as the Targeted Facebook ads.

But if they don’t optin after the first video we then send them a second video describing the personal success story of somebody they can relate to.

And if they still don’t optin we have three more ads in place to try and get them into our funnel.

The first is a video promoting the Live Coaching Call with Rito, the second is a video talking to them about the process and what to expect, and the third remaining video (5th total in this sequence) is one final heroes journey.

If your prospect doesn’t sign up after viewing all five of those videos, it’s probably safe to say they aren’t going to.

And with all that, if you’re not already, you should definitely be growing your business with Facebook advertising.

If you’re not already being kept in the loop via our #Bizathon2 list be sure to sign up today!

As always, Questions, Comments or just want to say Hi? Please do so in the comments section below.

Success by choice, not by chance.