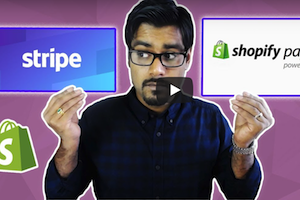 Today we dive a bit further into Stripe and Shopify payments.

If you’re new to dropshipping, check out Bizathon3 and get up to speed.

For many people just getting involved with Dropshipping, the idea of Payment Gateways can be confusing.

Enjoy the video as we cover Stripe & Shopify Payments for Dropshipping Stores:

We covered the basics of Payment Gateways For Shopify Stores here.

Today, we are covering Stripe and Shopify Payments.

We break them down into three sections:

Shopify Payments are supported by the following countries:

Since most of our traffic is directed toward the United States, we set our currency to USD.

Be sure to set your currency to whichever currency is used by your customers.

However, if you’re from the UK, Shopify will default to Pounds or Euro.

You won’t be able to edit this.

Contact Shopify Support and tell them to manually change your currency as it’s not ideal for your business.

If you live in the UK, but conduct your business in the US, you’ll can also use Stripe.

Even though Shopify Payments is powered by Stripe, they don’t support all of the same countries.

If that’s the case head on over to Stripe and create an account.

Once your account is created, link it to your Shopify store via your store’s settings.

Stripe is currently available in 25 countries.

India will be added to that list in the very near future.

What do you do when your country doesn’t support Shopify Payments or Stripe?

The first thing we suggest is confirming whether or not PayPal is accepted in your country.

If so, great, we’d definitely go that route.

Otherwise, if PayPal isn’t available in your country, 2Checkout is probably your next best bet.

We love hearing from you in the comments below!

Success by choice, not by chance,

If you’re not kept in the loop via our #Bizathon definitely sign up today.

4 Replies to “Getting Started With Stripe & Shopify Payments For Dropshipping…”